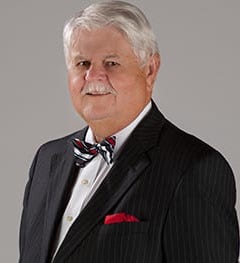 Jerry Beaver is one of North Carolinas best known and well-respected trial attorneys. He came to Fayetteville in 1973 from UNC law school and began work as an Assistant Public Defender.

During his years of practice, Jerry has achieved many honors and distinctions. He has been listed in “Best Lawyers in America” for more than twenty years and as one of North Carolinas Legal Elite by North Carolina Business Magazine since the inception of the directory. Since 2003, he has been selected for recognition in the publication North Carolina Super Lawyers, a listing of lawyers made up of 5% of North Carolina lawyers chosen through a rigorous process of polling, peer review and12 indicators of peer recognition and professional achievement and, in 2008, was listed in the Top 100 North Carolina Lawyers who received the highest point totals in the magazines nomination, research and blue ribbon review process. In October 2008, Jerry was inducted as a fellow of Litigation Counsel of American, an honorary association of lawyers selected from among only 3% of the national lawyers. He is listed in the National Directory of Criminal Defense Lawyers and has been listed as an AV lawyer by Martindale Hubble Legal Directory for over twenty years.

During his years of practice, Jerry has been involved in many of the regions most interesting and eventful criminal cases including representation of Robert Fulton Kelly in the notorious “Little Rascals” prosecution which resulted in the dismissal of more than 100 separate charges of child sexual abuse. Today, his criminal practice is largely concentrated in representation of clients charged with serious felony offenses in both State and Federal Court, including white-collar prosecutions, wire fraud, bank fraud, Medicaid and Medicare fraud, sexual offenses, drug charges, and crimes of violence. Over thirty-five years, Jerry has participated in hundreds of personal injury, premises liability and professional liability trials and settlements including his successful representation of Jackson “Rock” Pinckney, a Fort Bragg NC soldier against international film star Jean Claude Van Damme for personal injuries sustained during the filming of the motion picture “Cyborg,” a case featured on Court TV In the field of civil rights, he received the unanimous opinion of the United States Supreme Court in Graham v. Connor (1989), which established a nationwide standard for establishing 4th Amendment violations in police misconduct cases and also served as lead counsel in the precedent-setting Spell v. McDaniel (4th Cir., 1989), winning a $900,000 jury verdict in a police brutality action which, to this day, serves as a national standard for establishing municipal liability for police misconduct.

In the year 2012 Jerry teamed with daughter Laura E. Beaver in the defense of the plant manager of the House of Raeford Farms, Inc. in a criminal prosecution by the Environmental Protection Division of the United States Department of Justice in a jury trial before the United States District Court for the Eastern District of North Carolina where the plant manager was acquitted of all 14 counts of violation of the Clean Water Act for which he was charged.

Honors and Awards
Publications
Contact Us
Practice Areas
Client Reviews
★★★★★
ReliabilityMr David Courie & team said what they was gone to do and got it done! If your looking for an outstanding lawyer, well look no further. I had a traffic ticket that had hindered/Crippled me but his team cleared me. Theirs just not enough words that I can express. But I thank God he lead me to Beaver Courie Law Firm. Michael
★★★★★
ThankfulAppreciative for the help given to our family during a time of uncertainty. He was able to relieve anxiety and unnecessary fear. Grateful for their expertise. Cynthia
★★★★★
Attorney You can TrustDavid is trustworthy and very knowledgeable. He goes above and beyond what is expected and he is very professional in his approach to helping his clients. He made us feel like we were family and he was truly looking out for our best interest. I highly recommend him as an attorney. Mark
View More
Submit a Law Firm Client Review