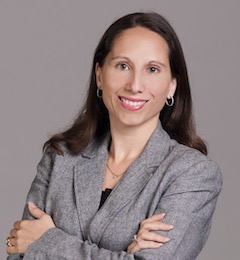 Cristina S. Quantock joined Beaver Courie, Attorneys at Law in 2012. Prior to joining the law firm, Cristina served as a prosecutor in Hoke County. While there, Cristina prosecuted both misdemeanors and felonies in Juvenile Court. Cristina was also responsible for prosecuting a variety of offenses at the District Court level including driving while impaired (DWI), domestic violence, and various traffic offenses. After working for the State, Cristina transitioned into criminal defense in private practice. Since joining the firm, Cristina has worked on hundreds of cases at both the District and Superior Courts. Cristina has handled a wide array of cases including traffic, DWI defense, and serious felonies such as attempted murder and rape. She has exemplified her trial experience and earned a reputation for zealously advocating on behalf of her clients.

With over 11 years of practice, Cristina has shown an attention to detail and a dedication to achieving the best possible results for her clients. Cristina has received various awards including the Greatest Around Fayetteville Award for Best Criminal Attorney in 2013, National Trial Lawyer’s Top 100 Trial Lawyers (2014-2020), “Top One Percent 2016” award by the National League of Renowned Attorneys, and The Fayetteville Observer’s “40 Under 40 Class of 2020” award.

After years of advocating for clients in the field of criminal defense, Cristina transitioned her practice to cover all areas of family law. Cristina has experience in handling difficult cases and knows how to help clients through challenging times. She also recognizes the importance of straightforward advice when trying to decide how to handle difficult situations. Her domestic practice covers all areas of family law including absolute divorce, child custody, alimony, separation agreements and equitable distribution. Cristina appreciates firsthand just how tough and emotionally draining it is when a marriage ends. As a mother of twins, Cristina also understands how important it is to protect the best interests of children despite the surrounding chaos. She has a proven track record of handling difficult cases and fighting for the best possible results.

While she is not practicing law, Cristina spends as much time as possible with her two beautiful children. Cristina is a native of Fayetteville who has decided to raise her family is this wonderful community.

Honors and Awards
Contact Us
Practice Areas
Client Reviews
★★★★★
ReliabilityMr David Courie & team said what they was gone to do and got it done! If your looking for an outstanding lawyer, well look no further. I had a traffic ticket that had hindered/Crippled me but his team cleared me. Theirs just not enough words that I can express. But I thank God he lead me to Beaver Courie Law Firm. Michael
★★★★★
ThankfulAppreciative for the help given to our family during a time of uncertainty. He was able to relieve anxiety and unnecessary fear. Grateful for their expertise. Cynthia
★★★★★
Attorney You can TrustDavid is trustworthy and very knowledgeable. He goes above and beyond what is expected and he is very professional in his approach to helping his clients. He made us feel like we were family and he was truly looking out for our best interest. I highly recommend him as an attorney. Mark
View More
Submit a Law Firm Client Review