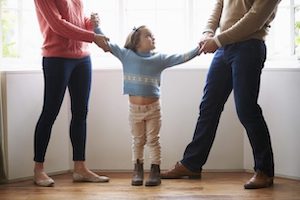 Perhaps the most the difficult part of a divorce or when a couple separates is deciding how the children will be cared for in the future. Child custody in North Carolina includes decision making authority regarding a child's welfare (legal custody) and where a child will live (physical custody).

Best Interest of the Child

Decisions regarding custody in North Carolina are based upon the "best interest of the child" standard. A Court considers numerous factors in making this decision such as the parent's role in caretaking, the age of the child, the availability of each parent, and misconduct on the part of either parent.

Parents always have the option of reaching a settlement regarding child custody either through a separation agreement or consent order. Reaching an agreement allows parties and their attorneys to exercise a level of control in the decision making process instead of leaving the decision to a Judge. If parties are unable to reach an agreement, the next step is to attend court-ordered mediation where parties will once again have an opportunity to reach an agreement regarding custody. The last step is to take the matter to trial and allow the Court to decide. It is important to have an experienced trial attorney who can not only help guide you through the settlement process, but who can vigorously represent you when a matter goes to trial. An attorney can properly present helpful information to the Court and help combat harmful allegations against you.

Since child custody is based upon the best interest of the child, custody decisions are subject to change. Sometimes a parent is relocating or circumstances in a home have changed which directly impact the welfare of a child. Having a knowledgeable attorney to assist you in telling your story to the Court can have a direct impact on child custody decisions.

Our area is fortunate to be surrounded by military service members and their families. A common part of this service includes deployments which can have a direct impact on custody arrangements. The law allows for expedited custody hearings when a service member has a pending deployment. Contact Cristina Quantock for more information.